Resolve conflicts of majority writes, and can survives minority failure.

Q: What is Byzantine problem?
TODO

Q: What are 2PC? What the workflow of 2PC looks like?

2PC: two phase commit. 2PC is one atomic commitment protocol(ACP).
The protocol achieves its goal even in many cases of temporary system failure.

Q: What are the problems with 2PC?

Q: What are 3PC protocol?

Motivation of 3PC: 2PC cannot dependably recover from a failure of both the coordinator and a cohort member during the Commit phase. 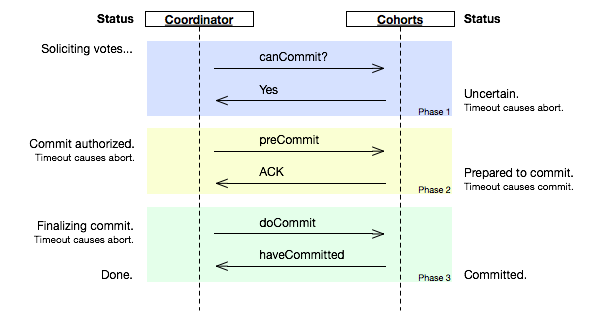 Q: How 3PC can be helpful for my system design?
TODO

Raft is a consensus algorithm designed as an alternative to Paxos. It was meant to be more understandable than Paxos by means of separation of logic, but it is also formally proven safe and offers some additional features.